Most Continued with Same Plan for 2015

SACRAMENTO, Calif. — Covered California released data on Wednesday regarding the number of 2014 enrollees it is renewing for private coverage in 2015.


Of those consumers, Covered California has forwarded the names of 944,000 consumers — or 92 percent of eligible consumers — to health plans. Covered California continues working to renew an additional approximately 80,000 effectuated enrollees eligible for ongoing coverage who, for a variety of reasons, could not be auto-renewed or have not selected another plan.

“We’ve set in motion the renewal process for most of our enrollees, and we are pleased with the number of enrollees who are in the process,” said Covered California Executive Director Peter V. Lee.

Among the 944,000 consumers who have been forwarded to the plans for renewal, 368,000 chose to explore their options for coverage. The remaining 576,000 took no action, meaning they will be renewed with their carrier and current plan. Of these consumers, 54,000 (about 6 percent) have chosen a different carrier than they had in 2014.

“Looking at the data on those who switched plans during the renewal process, for all plans they are retaining more than 90 percent of their consumers, which tells us that consumers seem to be happy with the coverage they have in most cases.”

The table below shows the 53,616 consumers who changed plans during renewal. 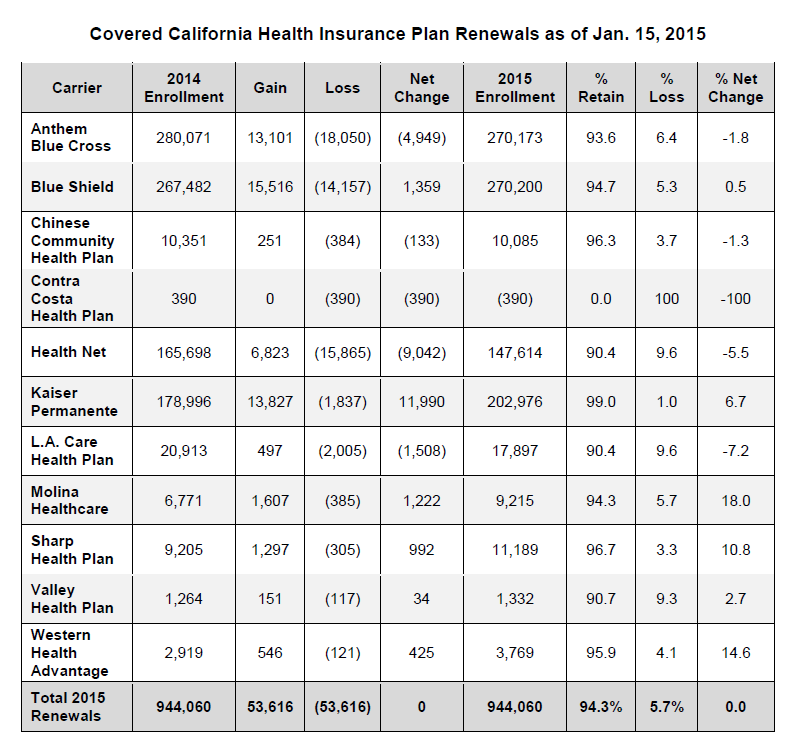 “In this first renewal period, while we saw some movement from plan to plan,” Lee said, “Covered California’s consumers mostly decided to stay where they were, with many consumers continuing in their same plans — even if they shopped among other options.”

Covered California began offering coverage for the first time in October 2013 for insurance taking effect in 2014. More than 1.4 million consumers picked a plan as of May 2014, and about 1.2 million of those consumers effectuated their coverage by paying at least one month’s premium.

In October, Covered California began the renewal process for 1.12 million Californians who had coverage. Consumers were notified that they could take steps to change coverage or could do nothing and they would be automatically renewed in their existing plan. In the period from October to December, some consumers joined Covered California as part of “special enrollment,” and others left as part of the normal attrition process. During December, Covered California forwarded to health plans the names of those consumers needing auto-renewal, and plans began sending billing statements this month. Additional consumers will be sent to plans as they pick new plans as required or resolve issues related to their case information.

Among those who did not renew, not everyone lost coverage. An estimated 85,000 consumers were determined eligible for Medi-Cal during the renewal process due to income or other changes. Others gained job-based coverage and no longer needed health coverage through Covered California.

“The enrollees in Covered California are a constantly changing group,” Lee said. “Some will use it as a permanent new place for their coverage. Others may enroll for intermittent periods of time or between jobs. We do know, based on the many hundreds of thousands of consumers who came in 2014 and stayed in 2015, that we are meeting a critical need in California.”

In addition, Lee reported Wednesday that as of Jan. 26, 273,111 consumers had picked a plan during open enrollment.

“In the two weeks since we last reported our new enrollment, Covered California has enrolled nearly 60,000 Californians for coverage,” said Lee. “This continued interest is heartening but also underscores the need to get the word out that the Feb. 15 deadline is coming. With over 700 enrollment events scheduled between now and Feb. 15, thousands of insurance agents and many storefronts promoting coverage, we’re seeing historic levels of activity to get the word out.”

Lee encouraged anyone without insurance to explore their options at CoveredCA.com and enroll before the end of open enrollment on Feb. 15.

Covered California is an independent part of the state government whose job is to make the new market work for California’s consumers. It is overseen by a five-member board appointed by the governor and the Legislature. For more information about Covered California, please visit www.CoveredCA.com.

Sign up for email updates to get deadline reminders and other important information.

Now that you are signed up for updates from Covered California, we will send you tips and reminders to help with your health coverage.

You may have heard about a new state law giving people more help paying their health insurance premiums next year. Wondering if it applies to you?

We’re right there with you. It’s still too early to know the exact costs and savings, but we’re working around the clock to make it a reality. Even if you didn’t qualify for financial help before, you may qualify now.

You can get quotes for 2020 coverage starting on Oct. 1. In the meantime, sign up for email alerts to get deadline reminders and other important information.