Average Increase Is 4 Percent; Consumers Who Shop Can Lower Their Premium by an Average of 4.5 Percent

SACRAMENTO, Calif. — Covered California announced its rates for 2016 and unveiled which health insurance companies will be offering plans through the marketplace. The statewide weighted average increase will be 4 percent, which is lower than last year’s increase of 4.2 percent and represents a dramatic change from the trends that individuals faced in the years before the Patient Protection and Affordable Care Act.

This means the majority of Covered California consumers will either see a decrease in their health insurance premiums or an increase of less than 5 percent if they choose to keep their current plan. In addition, consumers can reduce their premiums by an average of 4.5 percent, and more than 10 percent in some regions, if they shop around and change to a lower-cost plan within the same metal tier.

“This is another year of good news for California’s consumers and further evidence that the Affordable Care Act is working,” said Covered California Executive Director Peter V. Lee. “Covered California is holding the line on rates and keeping coverage within reach of hundreds of thousands of consumers, while giving them more choices than ever before.”

California Health and Human Services Secretary and Covered California Board Chairwoman Diana S. Dooley said, “Covered California is using all the tools provided by the Affordable Care Act, including the expansion of Medi-Cal, to provide coverage and care to millions.”

“Health care is local,” said Lee. “And as good as these average premium changes are across the state, it is important to look locally at each region. For example, in the two regions that encompass Los Angeles, the most populous regions in the state, the weighted average increase for consumers who stay in their current plan is only 1.8 percent. In addition, if they shop around, they could reduce their current costs by more than 11 percent by moving to a lower-cost plan in the same metal tier.”

Another indicator of the downward trend in premiums, which is used by some national comparisons of rate changes, is the change in the lowest-cost Bronze plan and the lowest-cost Silver plan. This is an important reference point because consumers have the ability to change carriers and plans. 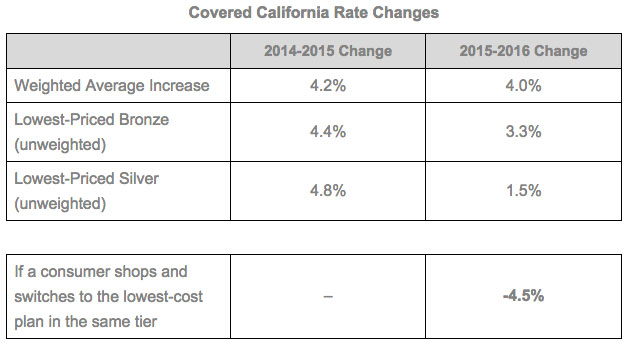 Lee credited several things with helping Covered California hold the line on rate increases:
“The sheer numbers and overall health of our enrollees allowed us to sit down with the health insurance companies and negotiate rates downward, which will save our consumers more than $200 million in premiums,” Lee said.

Lee noted that Covered California is an “active purchaser,” which allows it to choose which plans participate in the exchange and then negotiate the rates, networks and quality elements to get the best value for consumers. Covered California also created a standard benefit design, which establishes the services that plans must offer and creates a level playing field where health insurance companies must compete on price and quality.

“If you really want to see the potential of the Affordable Care Act, California is a good test case as a state that is using all the tools available to us,” Lee said.

UnitedHealthcare is the largest single health carrier in the United States, and it will be offering coverage in California in pricing regions 1, 9, 11, 12 and 13. Oscar is a new health insurance company that specializes in offering its members intuitive technology tools aimed at guiding them to better care. Oscar will offer plans in regions 16 and 18.

With the addition of the new carriers, and the expansion of its current carriers, Covered California is increasing choice and access to plans and providers. Californians in large metropolitan areas, where most of the state’s population lives, will continue to have from five to seven health insurance companies to choose from. In 2016, almost all consumers, 99.6 percent, will be able to choose from three or more carriers, and all will have at least two to choose from. This is an important improvement for consumers who live in areas that have historically had a limited choice of providers.

“We have more quality plans to choose from, which are serving more parts of the state,” said Covered California Director of Plan Management Anne Price. “We’re giving our consumers the choice of more doctors and more hospitals to ensure they can get the right care at the right time.”
In 2016, more than 90 percent of hospitals (“general acute centers” as designated by the California Office of Statewide Health Planning and Development) in California will be available through at least one health insurance company, and now about three-quarters (74 percent) will be available through three or more companies.
Additionally, several quality health care improvements were achieved as part of Covered California’s negotiating process. (For additional details on how health plans are improving how care is delivered, see the fact sheet “Covered California’s Story for 2016: Beyond the Rates — Promoting Quality Care,” online at www.coveredca.com/pdfs/newsroom/7-27-15-Beyond the Rates-fact sheet.pdf.)

Below is the complete list of the companies selected for the 2016 exchange:
For more details on the plans in specific pricing regions, see the booklet “Health Insurance Companies and Plan Rates for 2016,” posted online at www.CoveredCA.com/pdfs/7-27-CoveredCA-2016PlanRates-prelim.pdf.

Consumers will be able to shop around and look at their options during the upcoming renewal and open-enrollment period to decide whether to stay with their current plan or find another option that better suits their financial needs. Also, in most areas of the state, the federal subsidies given to enrollees to help reduce their overall costs will either increase or remain close to current levels and help offset any rate increase.

Covered California’s 2016 Shop and Compare Tool will be available online beginning the week of Aug. 3 at
http://www.coveredca.com/shopandcompare/2016/. Consumers will be able to look at plans and products in their area and get a preliminary estimate of costs and premium assistance for 2016 coverage.

Visit www.coveredca.com/pdfs/newsroom/CoveredCA-7-27-rate-announcement-graphics.pdf for presentation materials about Covered California’s plans and rates for 2016.

Covered California is an independent part of the state government whose job is to make the new market work for California’s consumers. It is overseen by a five-member board appointed by the Governor and the Legislature. For more information on Covered California, please visit www.CoveredCA.com.
News Releases Home