SACRAMENTO, Calif. — Covered California unveiled proposed rates for the 2018 individual market, announcing that all 11 of its participating health insurance companies will be returning for the upcoming year. Covered California continues to be a stable marketplace where consumers can find affordable coverage.

“Covered California remains robust and strong, and we are pleased to welcome back all 11 plans to compete in regions across the state,” said Covered California Executive Director Peter V. Lee. “While there is ongoing uncertainty and a lack of clarity at the federal level, consumers who need affordable health insurance will continue to have good choices in Covered California next year.”

Lee said the average statewide rate change for 2018 will be a 12.5 percent increase and noted that consumers can reduce that amount to less than a 3.3 percent increase if they shop for the best value and switch to the lowest-priced plan in the same metal tier.

“Covered California’s competitive market means consumers have the power to shop and find the best value,” Lee said. “We know our consumers look for the best deal and often end up paying less than the initial rates suggest.”

In addition to shopping, most consumers enrolled through Covered California will not pay the entire rate change because the amount of financial help they receive from the federal government will also increase. The federal subsidy is tied to the price of the second-lowest-cost Silver plan and as rates rise or fall, so does the subsidy, which will help offset a significant portion of the rate changes for consumers.

The rate change varies by health plan and region, with some plans having decreases in their premiums and others having increases, which means shopping is more important than ever. Across all plans, one factor that is built into these rates is a one-time adjustment because of the end of the “holiday” on health plans’ having to pay the Patient Protection and Affordable Care Act’s health insurance tax (HIT). This factor alone was worth an average of 2.8 percent. Without the one-time increase for the HIT, the average increase for the health plans Covered California contracts with would have been less than 10 percent.

Both the proposed rate change and the CSR surcharge are currently under review by state regulators, the Department of Managed Health Care and the California Department of Insurance.

The announcement of 2018 rates and plans comes in the midst of ongoing uncertainty at the federal level surrounding key elements of the Affordable Care Act, particularly in regard to cost-sharing reduction (CSR) payments.

The law requires health insurance companies to offer cost-sharing reductions to lower-income consumers, in the form of lower copays and deductibles, which help reduce out-of-pocket costs when consumers access the care they need. For the past four years, the federal government has directly reimbursed the health insurance companies for those costs. While health plans are required to help these consumers lower their out-of-pocket costs, those payments are in jeopardy because the administration has stated it will only commit to making these payments on a month-to-month basis.

Covered California instructed health insurance companies to submit their rates assuming direct payment to fund the CSR subsidies would be continued, but to also submit a separate CSR surcharge to “load” any costs to fund this program onto Silver-tier plans for those who receive subsidies. As a result, Silver-tier consumers may see an additional “CSR surcharge” that averages 12.4 percent — ranging from 8 percent to 27 percent on the gross price of their premiums — if there is no commitment from the administration to fund these payments through 2018. However, while the gross or total premium for consumers receiving subsidies would reflect this CSR surcharge, in most cases, consumers would not see a “net” change in what they would pay since the premium tax credit would also increase.

“This action allows Covered California to keep the market stable and protect consumers from this uncertainty,” Lee said. “While most Silver-tier consumers will not see the full impact of the ‘CSR surcharge,’ and every consumer could avoid paying any additional premium by shopping, we hope that we do not need to implement this work-around that would cause unnecessary confusion and ultimately cost the federal government more than it would to continue to make the payments directly.

“A decision by the federal government is needed in the next few weeks,” Lee continued.
“Without clear confirmation from the administration that these payments are secured, we will be forced to have health insurance companies in California add a CSR surcharge to the Silver-tier rates.”

In releasing these rates, Covered California also communicated to Secretary of Health and Human Services Tom Price and the Centers for Medicare and Medicaid Services Administrator Seema Verma the need for clear guidance regarding the ongoing funding of the CSR subsidy program. (The letter is available at: http://www.coveredca.com/pdfs/newsroom/CoveredCA_CL_2018_Rates-HHSLetter.pdf)

“We’ll be working diligently with health plans, insurance agents, community partners and others as we approach open enrollment to make sure consumers know how to shop smart this fall for 2018 coverage,” said Lee.

A Stable Market, Consumer Choice and the Reduction of Anthem’s Coverage Footprint

Covered California has built a competitive market that continues to attract a good risk mix — the second best in the nation — by using robust marketing to attract consumers to the plans and benefits that address their needs. The stability of the individual market was confirmed by recent reports from the Centers for Medicare and Medicaid Services and the Kaiser Family Foundation, which respectively reported that the health status of consumers in the individual market nationally remains steady and health insurance companies are becoming profitable.

For 2018, all of the 11 health insurance companies offering plans in 2017 are returning to the market for a second straight year. The uncertainty at the federal level, however, is affecting some companies. In particular, Anthem Blue Cross of California is withdrawing from 16 of California’s 19 pricing regions where it serves approximately 153,000 consumers, while remaining in three regions (regions 1, 7 and 10) where it covers more than 108,000 consumers (41 percent of its current enrollment).

While this change will mean about 10 percent of those enrolled in Covered California will need to pick a new plan, the individual market in California remains very competitive, with more than 82 percent of consumers being able to choose from three or more health insurance companies. There will be no “bare” counties or areas where consumers have no plan options. In addition, 88 percent of hospitals in California will be available through at least one Covered California health insurance company in 2018. The fact sheet “Covered California’s Individual Market in 2018: Competition and Choice” can be found here: http://www.coveredca.com/pdfs/newsroom/CoveredCA_Consumer_Choice_2018.pdf.

“The enrollees who are affected by Anthem’s decision to pull out of some regions should know that their existing coverage will remain intact throughout the remainder of 2017, and they will have good options when they switch plans for 2018,” Lee said. “We will assist these consumers in shopping around for the right plan, which will be helped by the fact that 84 percent of doctors contracted by Anthem are also available through another health plan.”

During the renewal process, all consumers will have an opportunity to shop for a new plan by working with a Certified Insurance Agent, the Covered California Service Center or another certified enroller. Those Anthem consumers who need to move to a new plan and choose not to actively shop will be renewed automatically into the lowest-cost plan in their same metal tier. They can change that plan during open enrollment if they choose.

Covered California will take robust steps in the months ahead to assist the affected Anthem consumers as they transition to another plan, including: regular communication with agents so they can communicate options to their consumers, a new provider directory that will allow consumers to see which doctors are available in which plans, regular marketing emails explaining to consumers their options, and updates to CoveredCA.com with the latest information.

Providing Consumers With the Right Care at the Right Time

In announcing the new rates, Covered California also reiterated its continued commitment to making sure consumers are getting the care they need and addressing the underlying problem of high health care costs. “We are about more than just getting people an insurance card,” said Lee. “In 2018 we will build on the work of the past four years to make sure people with insurance through Covered California are getting the right care and the right time.”

For example, 2017 marked the first year of a policy requiring all health plans to assign those who sign up with them to a primary care clinician within 60 days of enrolling. This new initiative aims to help consumers get the right care when they need it by connecting them to providers who can serve as the point of entry into an often complex and daunting health care system. The result was that 99 percent of consumers were matched to a primary care physician or clinician.

These improvements build on features already in place that ensure most outpatient services in Silver, Gold and Platinum plans are not subject to a deductible, including primary care visits, specialist visits, lab tests, X-rays and imaging. In addition, some Enhanced Silver plans have little or no deductible and very low copays, such as $5 for an office visit. Even consumers in Covered California’s most affordable Bronze plans are allowed to see their doctor or a specialist three times before the visits are subject to the deductible. 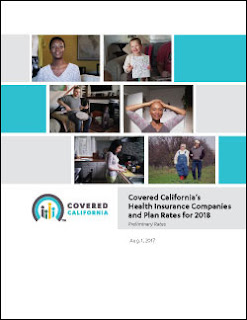 “Covered California is a model that is working,” Lee said. “I applaud the many health insurance companies, doctors, hospitals and other providers who are in it for the long haul of making sure Californians can count on them for affordable, quality health coverage and care.”