SACRAMENTO, Calif. — Covered California announced today that more than 90,500 new consumers signed up for coverage through Nov. 30. The number of plan selections is well ahead of the pace set in 2016, which marked the last time Covered California delayed its marketing push until after Election Day, when 80,000 consumers signed up through November.

“Covered California is off to a solid start, signing up tens of thousands of people who understand the importance of having quality health care coverage, but it’s just a start,” said Covered California Executive Director Peter V. Lee. “For most of the nation, the open-enrollment period is done in two weeks, but that’s not the case in California.”

“We know that deadlines matter to people, and for Covered California the two key deadlines coming up are Dec. 15 and Jan. 15,” Lee said. “Sign up by Dec. 15 and you can be covered on New Year’s Day, and if you miss that deadline you will still have until Jan. 15 to sign up for quality health care coverage that meets the needs of you and your family.”

While the number of plan selections is ahead of the pace set during the last election year, it is slightly behind the pace set last year when 102,000 consumers signed up through November. Lee notes that while it is too early to draw conclusions, there could be several possible explanations for why enrollment is behind last year’s pace. In addition to delaying marketing until after the election, there is less media attention on open enrollment as the debate over “repeal and replace” has faded, and consumers may not sign up because of the removal of the individual mandate penalty.

Covered California projected the removal of the mandate penalty would result in a drop in enrollment in 2019 that ranges from 7 to 18 percent, with a base projection of 12 percent.

“While we know that the financial help offered through Covered California is the big motivator for many people to enroll, with the penalty removed we do expect some consumers to roll the dice and go without health coverage,” Lee said. “We also know that life can change in an instant, and it’s important to have health coverage when it does.”

Covered California data shows that more than 50,000 of its members were either diagnosed with or treated for cancer in 2017. Another 22,000 members fractured, dislocated or sprained their arm or shoulder.

“Being covered means you are protected from medical bills that can range from tens of thousands of dollars into the millions,” Lee said. “That’s why it is so important for Californians to take a look at their options and find out if they are eligible for financial assistance to help bring that coverage within reach.” 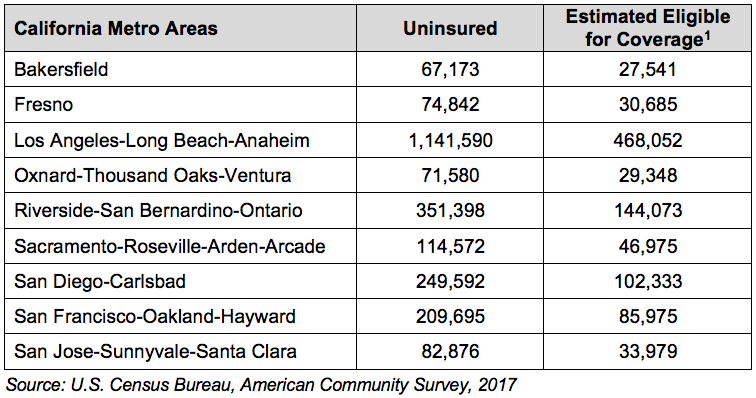 Those interested in learning more about their coverage options should go to www.CoveredCA.com, where they can get help to enroll. They can explore their options and find out if they qualify for financial help by using the Shop and Compare Tool. They can also get free and confidential enrollment assistance by visiting www.coveredca.com/find-help/ and searching among 700 storefronts statewide or 16,000 certified enrollers who can assist consumers in understanding their choices and enrolling, including individuals who can assist in other languages. In addition, consumers can reach the Covered California service center by calling (800) 300-1506.

[1] Covered California estimate when accounting for those ineligible for coverage due to immigration status.