SACRAMENTO, Calif. — Covered California will help celebrate the 91st birthday of Martin Luther King Jr. on Monday, by having a contingent of leaders honor the civil rights icon by participating in parades in both Los Angeles and Sacramento.

“Martin Luther King Jr. was a champion for social justice, and fought to bring universal healthcare to all Americans, regardless of their race, creed or color,” said Covered California Executive Director Peter V. Lee, who will join Covered California staff in the 35th Annual Kingdom Day Parade Los Angeles parade. “Dr. King’s beliefs and values mirror the goals of Covered California, which for the past seven years has brought healthcare to millions more California through the Affordable Care Act.”

Lee will be joined in the parade by Dr. David M. Carlisle, president and CEO of Charles R. Drew University of Medicine and Science (CDU) in Los Angeles.

“As a health professions university founded to address health disparities in under-resourced communities, Charles R. Drew University of Medicine and Science shares the values of Covered California and the conviction that healthcare is an absolute right for all,” Carlisle said. “We also know that it was part of Dr. King’s vision that everyone has access to affordable, high-quality healthcare.  We are proud that our students and faculty are walking in today’s parade.”

The parade, which is described as the largest celebration of Dr. King’s birthday in America, will start at 10:00 a.m. at Western and Martin Luther King Jr. Blvd. The parade route runs down MLK Blvd. to Crenshaw Blvd., eventually ending at Vernon Avenue.

Covered California and CDU have teamed up before to show how Dr. King’s message of equality aligns with improving health care. In 2018, the two organizations came together to erect a 69-by-30 foot mural of Dr. King at the school. The mural features one of King’s most famous quotes about health disparities, “Of all the forms of inequality, injustice in health care is the most shocking and inhumane.” 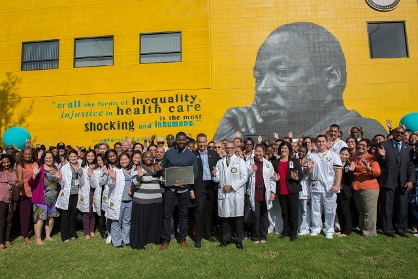 March for the Dream

In Sacramento, Covered California representatives will participate in the “March for the Dream” parade, walking a 4-mile loop in the historic Land Park neighborhood, beginning and ending at Sacramento City College at 3835 Freeport Blvd.

Also participating in the parade will be Covered California community partners such as Sacramento Covered, the California Black Health Network and certified insurance agents.

Covered California representatives will be available for interviews at both locations.

Lee reminds uninsured consumers that they can still get coverage. Covered California’s open-enrollment period runs through Jan. 31. Consumers can easily find out if they are eligible for financial help and see which plans are available in their area by entering their ZIP code, household income and the ages of those who need coverage into Covered California’s Shop and Compare Tool.

Those interested in learning more about their coverage options can:

Covered California is an independent part of the state government whose job is to make the health insurance marketplace work for California’s consumers. It is overseen by a five-member board appointed by the governor and the legislature. For more information about Covered California, please visit www.CoveredCA.com.

CDU is a private, non-profit student-centered minority-serving medical and health sciences University that is committed to cultivating diverse health professional leaders who are dedicated to social justice and health equity for underserved populations through outstanding education, research, clinical service, and community engagement.

Located in the Watts-Willowbrook area of South Los Angeles, CDU has graduated, since its inception, more than 600 physicians, 1,270 physician assistants and nearly 1,700 other health professionals, as well as training over 2,700 physician specialists through its sponsored residency programs. Its Mervyn M. Dymally School of Nursing has graduated over 1,400 nursing professionals, including over 1000 family nurse practitioners, since it opened in 2010.  CDU is a leader in health disparities research with a focus on education, training, treatment and care in cancer, diabetes, cardiometabolic and HIV/AIDS.