“The new and expanded financial help provided by the American Rescue Plan is a very big deal for millions of Americans,” said Peter V. Lee, executive director of Covered California. “These new subsidies will help more people get covered, lower premium costs and put money back into people’s pockets when they sign up for health insurance through the Affordable Care Act.”

Who benefits from the American Rescue Plan?

The American Rescue Plan lowers health care premium costs for people who get coverage through Covered California, or through other Affordable Care Act marketplaces across the nation, by providing new and expanded subsidies to make health insurance more affordable than ever before. A Covered California analysis finds that an estimated 25 million Americans could potentially benefit from the new law (see Table 1: Americans Eligible for Assistance From the American Rescue), including:

Table 1: Americans Eligible for Assistance From the American Rescue Plan1 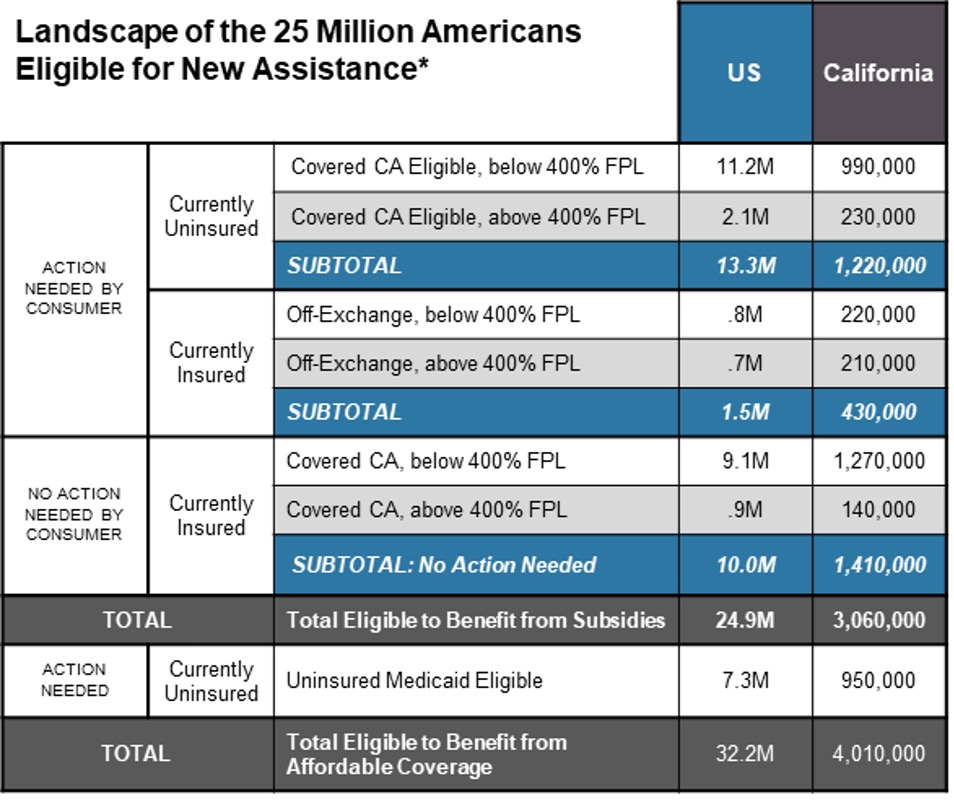 Syd Winlock is a small-business owner in Elk Grove and a Covered California enrollee. The new financial help available through the American Rescue Plan will lower his family’s $1,100 premium by $450 a month.

“One of the things I was looking at doing was expanding some services that we provide, and I can direct the money that we were paying for health care to that,” Winlock said. “As you guys put money back into my pocket, I’m going to put money back into the economy.”

In addition to its analysis, Covered California also laid out the steps it will be taking – including working with its contracted health insurance companies, agents and navigators, and community leaders – to effectively implement the American Rescue Plan.

While the law will potentially benefit 25 million Americans, many of them will need to act, requiring the need for a coordinated and targeted outreach efforts. The Congressional Budget Office estimates that only 10 percent of those uninsured and eligible for new subsidies will enroll, and only 20 percent of those currently insured but unsubsidized will sign up for the new benefits.

The main reasons cited for the projections are that many uninsured still believe they cannot afford coverage, off-exchange consumers are less likely to switch to a marketplace in mid-year, and that program is temporary.

“The challenges are real, and this will not be easy, but we can do better – not only for Californians, but for Americans across the country,” Lee said. “Covered California and our partners are ready to lean-in, to spread the word that new money is available that can help lower premium costs for millions.”

Covered California released a roadmap describing Covered California’s Approach to Promoting the American Rescue Plan: Target Groups and Strategic Approaches and detailed analysis of those eligible for American Rescue Plan benefits in each state, that includes an analysis of potential marketing investments for the federal marketplace and other states that would be on par with those California has historically made.

Covered California’s approach describes three strategic approaches it will undertake to reach out to and enroll as many Californians as possible:

“Covered California has deployed these tactics and strategies over the past seven years, and they are critical to making things work,” Lee said. “We stand ready to do everything we can to make the American Rescue Plan successful for as many Californians as possible, and we hope and expect the federal administration and other states will do the same.”

Californians Can Easily Find Out Their Benefits

Covered California will launch a new “Shop and Compare” tool on April 12 that will allow consumers to easily see exactly how they will benefit from the new law. People will be able to see how much new financial help they are eligible for in just a few minutes by entering their ZIP code, household income and the ages of the people in the household.

1 Table only shows those estimated to be eligible for subsidies based on maximum required contribution percentage of household income using available administrative data (on income, age, and benchmark premiums) from California’s marketplace: the actual eligibility may differ to the extent that there are differences in the age, income, and premium costs for other states and the off-exchange from what is observed in Covered California’s data. Not shown are the estimated 1.4 million consumers who may receive higher subsidies because they are receiving unemployment insurance income. Additionally, off-exchange estimates do not include consumers who may be enrolled in coverage that is not ACA compliant (e.g. “grandfathered” plans), who may also benefit from new subsidies.