SACRAMENTO, Calif. — New data from Covered California shows a surge in enrollment as tens of thousands of consumers signed up for health care coverage to benefit from the lower premiums now available through the American Rescue Plan. More than 76,000 people have signed up for coverage since Covered California launched a special-enrollment period, which is more than 2.5 times as many as those that enrolled during the same time period in 2019.

“The new and expanded financial help provided by the American Rescue Plan is lowering premiums for thousands of Californians, making it easier for them to get covered and stay covered,” said Peter V. Lee, executive director of Covered California. “The good news is that Californians still have time to sign up, but they need to act quickly, because every month that goes by is a month without coverage and money lost.”

The American Rescue Plan provides new and expanded financial help to people who receive their health insurance through an Affordable Care Act Marketplace, like Covered California. The law ensures that everyone eligible will pay no more than 8.5 percent of their household income on their health care premiums. Covered California launched a special-enrollment period on April 12 to allow Californians to sign up for coverage, or switch their coverage to the exchange, in order to begin benefiting from the new law.

The data shows that a total of 76,360 people signed up between April 12 and May 15, which is 46,000 more — or 2.5 times higher — than the same time period in 2019, when a traditional special-enrollment period was last held.[1] (See Table 1: Consumer Plan Selections During Special Enrollment.) 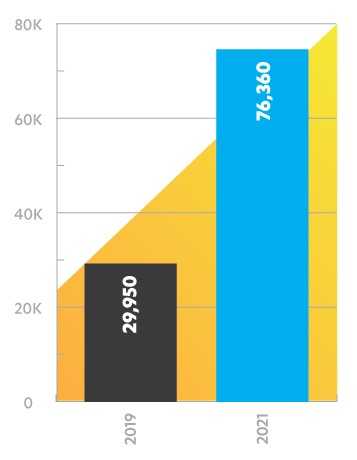 “Quality health care coverage through Covered California is more affordable than ever, and the sooner people sign up, the sooner they can start saving and be covered,” Lee said. “We have seen consumers save hundreds of dollars a month by switching to Covered California, while others are able to get covered for $1 a month.

“For less than the price of a bus ride, or a soda, many Californians are able to get high-quality coverage from some of the best doctors and hospitals in the country,” Lee said. “Do not miss out on this historic opportunity, you owe it to yourself to check it out and see what this new financial help can mean for you and your family.”

Overall, about 680,000 of Covered California’s 1.55 million enrollees are now enrolled in plans that cost $1 per month. Of those, nearly 400,000 people signed up for enhanced Silver plans that include cost-sharing benefits such as lower co-pays, lower deductibles and lower out-of-pocket expenses which make it easier for them to access the health care they need.

“Lowering the cost of coverage and care helps people stay covered and it allows them to put that money back into our economy, which helps their communities,” Lee said.

Which Californians Need to Act Now to Benefit From the American Rescue Plan?

The new financial assistance can directly help Californians by lowering their monthly premium to levels never seen before. However, in order to maximize their savings, the following groups of people need to act now by May 31 in order to have coverage that starts on June 1:

Figure 1: Premiums Are Lower Than Ever for the Uninsured

Figure 2: Off-Exchange Consumers Save by Switching to Covered California

Covered California’s special-enrollment period will run through the end of the year, but Lee encouraged consumers to act now in order to start saving.

“Do not miss out on this opportunity,” Lee said. “We don’t want any eligible person to be uninsured or leave money on the table.”

Consumers Can Find Out in Minutes How Much They Can Save

Covered California is encouraging people to check if they are eligible for lower premiums due to the American Rescue Plan. Consumers can easily see exactly how they can benefit from the new law at CoveredCA.com by entering their ZIP code, household income and the ages of the people in the household to see how low their premiums can be and the health insurance options in their area.

[1] In 2020, Covered California had 64,430 plan selections during the same period. The increase was due to a special-enrollment period established to respond to the COVID-19 pandemic and recession, which was supported by a major outreach campaign. Today’s announcement is almost 20 percent higher than the results of 2020.