Covered California Begins 2022 With a Record 1.7 Million Enrollees and Encourages Uninsured Californians to Sign Up Now as Deadline Approaches

SACRAMENTO, Calif. — With the final deadline for the current open-enrollment period quickly approaching on Jan. 31, Covered California announced that 1,744,000 people have signed up for coverage, which is a new record high for the start of a coverage year (see Figure 1: Covered California Plan Selections to Start a Coverage Year). The total represents an increase of more than 350,000 people compared to the start of 2020, as Covered California has used the increased financial help from the American Rescue Plan to expand coverage and meet the needs of people affected by the COVID-19 pandemic.

“The pandemic has highlighted the importance of having quality coverage, and with a surge of COVID-19 infections across the state, now is the time to make sure you have health insurance,” said Peter V. Lee, executive director of Covered California.

“We want to encourage anyone who is currently going without health care coverage to check out their options and sign up so they can be covered in 2022.” 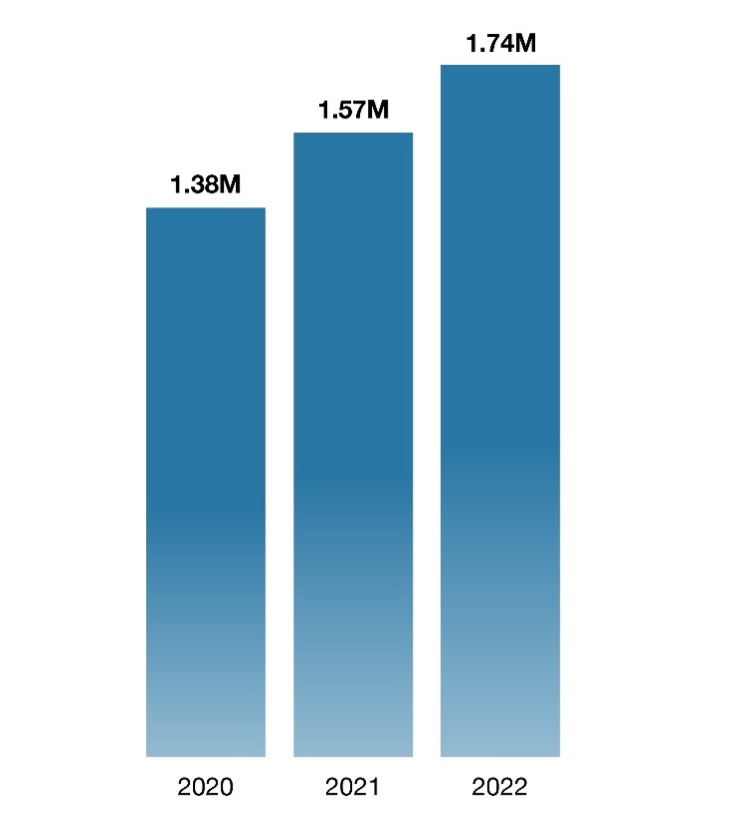 More than 6 million Californians have been infected by the virus, and the state’s death total is nearing 80,000.

In addition, a recent study found that the average cost for a complex care COVID-19 hospitalization, in which patients required ventilation or admission into an intensive care unit, was more than $127,000 in California.

“We are all struggling to adjust to the changing nature of this pandemic,” Lee said. “Some constants, however, are that we know that we all need to get vaccinated, wear a mask, and get insurance to stay well and protect ourselves from financial disaster if we need hospital care.”

The record-high number of enrollees is being made possible by the American Rescue Plan, the federal response to the pandemic, which expanded the amount of financial help available to consumers. The law builds on the Affordable Care Act and work done in California, where Gov. Newsom and the Legislature established a state subsidy program that provided more financial help and — for the first time — extended it to middle-income consumers. Due to the American Rescue Plan, two-thirds of Covered California enrollees are eligible to get coverage from a brand-name plan for 2022 for $10 or less per month. In addition, financial help for middle-income consumers is lowering many of their premiums by hundreds of dollars every month.

“California paved the way for the American Rescue Plan, and the increased financial help is allowing more people to get covered and stay covered,” Lee said. “That’s critical because a quality health plan through Covered California gives you access to needed primary care or mental health services, and protects you from a six-figure hospital bill if you get sick or injured.”

The Historic Reduction of the Uninsured Rate in California

California has reduced its uninsured rate by more than any other state in the nation since 2014, when coverage first became available through the Affordable Care Act. The decrease has benefited every major ethnic group in the state and been driven by the state’s expansion of Medi-Cal and the enrollment in Covered California. Between 2013 and 2020, the uninsured rate among California Latinos has been cut by more than half, and African American and Asian American/Pacific Islander uninsured rates have dropped by nearly two-thirds.

Figure 2: Uninsured Rates Have Plunged Among All Major Ethnic Groups in California (2013-2020)2 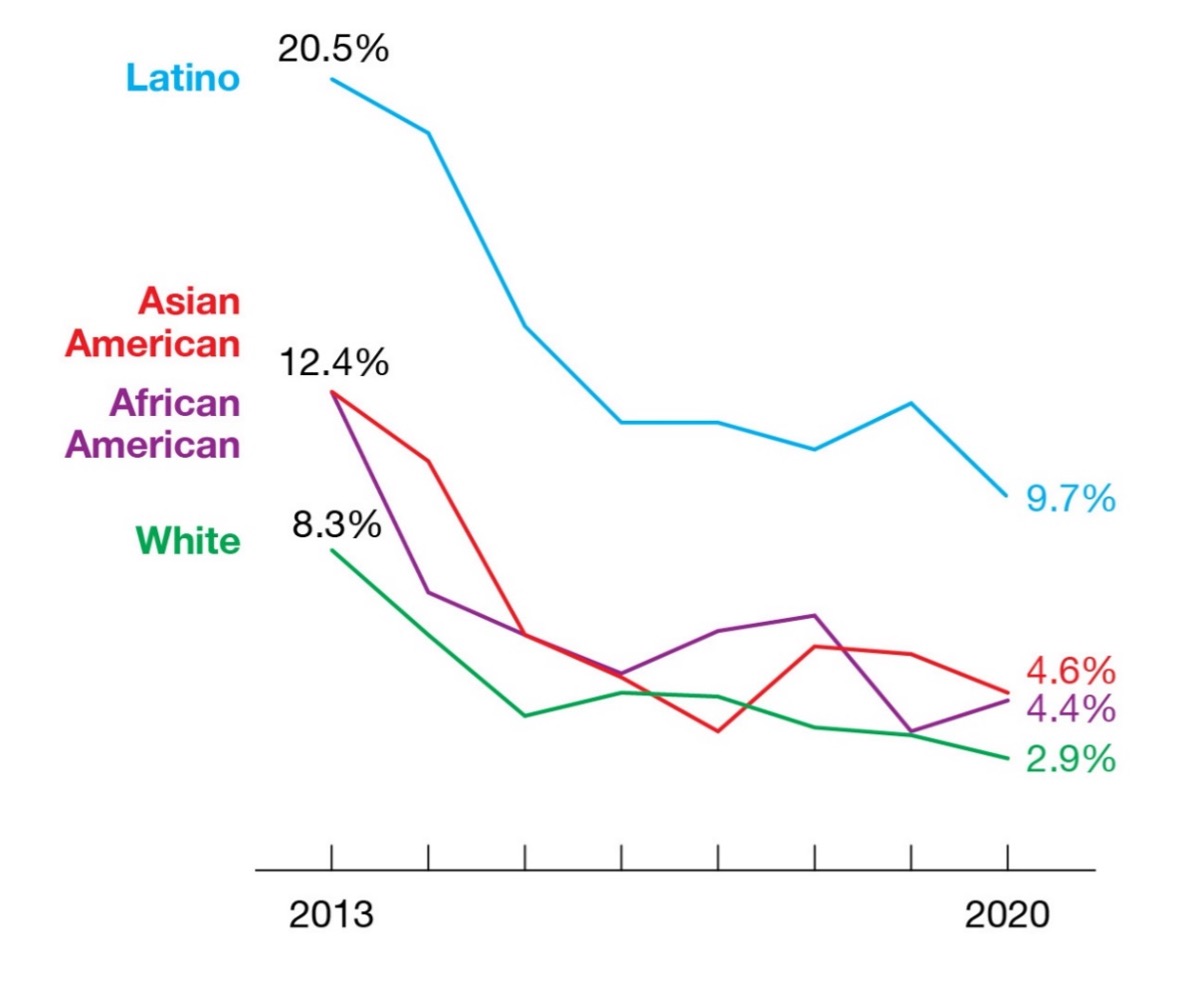 Since the start of the pandemic in 2020, Covered California has played a critical role in expanding coverage to reduce the uninsured rate even further. Covered California established special-enrollment periods to help people get insured and benefit from the new financial help included in the American Rescue Plan.

As a result, Covered California has seen significant increases in enrollment among communities of color, including among African Americans (a 56 percent increase), Latinos (34 percent) and Asian Americans/Pacific Islanders (21 percent).

Table 1: Dramatic Increase in Enrollment Among All Major Ethnic Groups

“When the pandemic started, Covered California opened its doors to everyone eligible to make sure they had access to the health care coverage they needed,” Lee said. “We have seen dramatic enrollment increases across the board — including in our communities of color — but we know there is more work to do.”

The Open-Enrollment Deadline Is Quickly Approaching

Covered California joined Latino and African American leaders to urge people to enroll before the final open-enrollment deadline, because despite the success in reducing the uninsured rate, significant disparities remain.

While Latinos saw the biggest drop in their uninsured rate as of 2020, they are still the most likely to be uninsured. Civil rights leader Dolores Huerta first stood with Covered California when it began offering coverage in 2014. She has been fighting for equality and justice for nearly 70 years and says now is the time for Californians to act.

“Being covered helps us stay healthy and build stronger communities, so tell your family, tell your friends*, *sí se puede,” Huerta said. **“The Affordable Care Act opened the door to coverage for millions, the American Rescue Plan helped bring the cost of coverage within reach, and time is running out to protect yourself and your familia.”

In addition, while African Americans and Asian Americans/Pacific Islanders have seen big drops in their uninsured rates, they are about 1.5 times more likely than Whites to be without coverage.

“Achieving health equity is not only the right thing to do for all Californians, but it will also help us face down this historic public health crisis,” said Dr. Carlisle, CEO and president of Charles R. Drew University of Medicine and Science in Los Angeles. “We are in this fight together, and widely available and affordable health coverage will put California in the best position to get on top of COVID-19 and be prepared for future challenges.”

Covered California’s open-enrollment period runs through Jan. 31, 2022 — unlike the federal deadline, which ended on Jan. 15 for states that use healthcare.gov. Consumers who sign up by Jan. 31 will have their coverage start on Feb. 1.

Consumers Can Easily Check Out Their Eligibility and Options at CoveredCA.com

Those interested in applying for coverage can explore their options — and find out whether they are eligible for financial help — in just a few minutes by using the Shop and Compare Tool at CoveredCA.com. All they need to do is enter their ZIP code, household income and the ages of those who need coverage to find out which plans are available in their area.

In addition to signing up consumers through its website, Covered California also partners with certified and licensed enrollers who provide free and confidential help throughout the state. Covered California works with more than 11,000 Licensed Insurance Agents, who have established more than 500 storefronts in communities across California. Consumers can visit https://www.coveredca.com/support/contact-us/ and search for the agent nearest them.

Consumers can also call Covered California at (800) 300-1506 and get information or enroll by phone.

Covered California’s online enrollment portal and certified enrollers will also help people find out whether they are eligible for Medi-Cal. Medi-Cal enrollment is available year-round, and the coverage will begin the day after a person signs up. In addition, people can apply for Medi-Cal online or by picking up an application at one of the many county resource centers throughout the region.

1 Data through Dec. 31, 2021. Renewal data for 2022 reflect net plan selections as of this release. The final count of renewal plan selections reported at the end of the open-enrollment period varies due to lags in carrier transactions; based on 2021 plan year data patterns, the final number of net renewals may decrease an estimated 1.0 and 1.5 percent of renewals, or ~25,000 consumers from what is seen as of Dec. 31, 2021.