Covered California Hails the Signing of the Inflation Reduction Act, Which Will Continue to Provide Lower Costs and Expanded Access to Quality Health Insurance for Californians

SACRAMENTO, Calif. — Covered California hailed President Joe Biden’s signing of the Inflation Reduction Act, which includes a three-year extension of the increased and expanded financial help for consumers who sign up for health care coverage through an Affordable Care Act marketplace.

“Extending this financial help is critical for the millions of Americans who rely on the Affordable Care Act for health insurance, and it will help them save thousands of dollars a year on their health insurance costs,” said Jessica Altman, executive director of Covered California. “By continuing to provide these subsidies, we are bringing affordability within reach of more people than ever before – at a time when they need it most –helping more Americans get covered and stay covered.”

“The Inflation Reduction Act builds on California’s progress to expand access to health insurance coverage through both our health insurance exchange, Covered California, and the expansion of our Medicaid program, Medi-Cal, to eligible individuals regardless of immigration status,” said Dr. Mark Ghaly, California Health and Human Services Secretary and chair of the Covered California Board of Directors. “This landmark law also lowers prescription drug costs for Californians, which builds on our own work to make prescription drugs less expensive and health care overall more accessible and affordable.”

The Inflation Reduction Act extends the increased and expanded financial help that was initially included in the American Rescue Plan, which was the federal response to the COVID-19 pandemic. The expanded subsidies were set to expire at the end of 2022, and this extension ensures the availability of expanded financial help through the end of 2025. The law made health insurance dramatically more affordable by:

Since the American Rescue Plan went into effect, Covered California’s enrollment increased by 150,000 people between March 2021 and March 2022, and now stands at 1.7 million.

“The American Rescue Plan lowered costs and boosted enrollment — particularly among communities of color, lower-income families and many in the middle-income bracket who for the first time received federal financial assistance to help pay for their coverage,” Altman said. “Cementing these benefits for an additional three years means that Californians and people across the country will continue to have the access to health coverage they need and deserve.”

Who benefits from the increased and expanded financial help?

The Californians who will benefit the most are low-income: 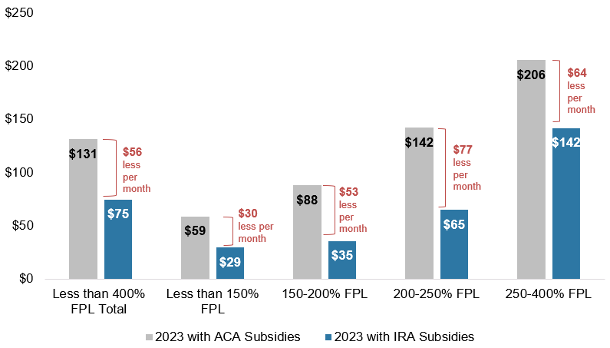 In addition, California’s middle-income families will continue to benefit from the expanded subsidies, which eliminated the so-called “subsidy cliff” and made many eligible for federal financial help for the first time.

Covered California projects that consumers with an income above 400 percent FPL, which amounts to $51,520 as an individual and $106,000 for a family of four, will save an average of $324 per month on their premiums (see Figure 2: Monthly Net Premium Savings for Subsidized Enrollees Over 400 Percent FPL With Extension of American Rescue Plan Subsidies).

“Thanks to the Inflation Reduction Act California’s middle-income families will get a significant break on their health insurance costs, and save an average of nearly $4,000 a year if they enroll in Covered California,” Altman said. 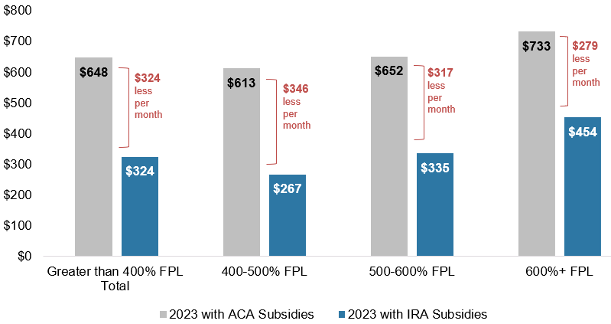 “The money that will continue to be available means that many people who are currently uninsured will be able to get comprehensive coverage for the price of a few cups of coffee,” Altman said. “The American Rescue Plan was part of bringing California to an all-time low uninsured rate, and the Inflation Reduction Act will empower us to keep building on that tremendous progress.”

Covered California has asked its health insurance carriers to resubmit their rates for 2023 based on the subsidy extension. Covered California estimated the uncertainty surrounding the future of the expanded subsidies added less than a percentage point to this year’s rate change of 6 percent.

Once finalized, Covered California will begin sending renewal notices that reflect the continued savings to its existing consumers starting in October. Open enrollment will begin on Nov. 1.

Covered California is the state’s Affordable Care Act marketplace, where Californians can find affordable, high-quality health insurance from name brand companies. It is the only place where individuals who qualify can get financial help on a sliding scale to reduce their monthly costs. Depending on their income, some consumers may qualify for the free or low-cost Medi-Cal program.

Covered California is an independent part of the state government – overseen by a five-member board appointed by the governor and the Legislature – with a mission to increase the number of insured Californians, improve health care quality, lower costs, and reduce health care disparities. For more information about Covered California, please visit www.CoveredCA.com.