SACRAMENTO, Calif. — Covered California announced its plans and rates for the 2022 coverage year, which will include a full year of lower premiums under the American Rescue Plan. The new and expanded financial help provided by the law has led to a record 1.6 million people enrolled in Covered California, which contributes to the state having one of the healthiest consumer pools in the nation, resulting in a low rate change for a third straight year.

“The American Rescue Plan will keep making a huge difference by lowering costs for many who were previously eligible, and by building on California’s state subsidies to provide financial help to lower premiums for many middle-income Californians for the first time,” said Peter V. Lee, executive director of Covered California. “By getting more people insured and lowering the costs of coverage, we are creating a virtuous cycle of more people being insured, healthier consumers and lower rates for everyone.”

“California is continuing to make significant progress towards covering everyone in our state, and a key part of that is to make sure folks can take advantage of the federal support through the American Rescue Plan ,” said Gov. Gavin Newsom. “The pandemic highlighted how important it can be to have access to quality, affordable health care coverage, and Covered California is making that happen for more people than ever before.”

“The new and expanded financial help from the American Rescue Plan builds on the Affordable Care Act and is allowing more Californians than ever before to get covered and stay covered,” said Dr. Mark Ghaly, California Health and Human Services secretary and chair of the Covered California Board of Directors. “Health care is a right, and together we are working toward providing everyone in the state with access to quality, affordable coverage.”

The preliminary average rate change of 1.8 percent will apply to California’s individual market, which consists of approximately 2.3 million people, including the 1.6 million enrolled through Covered California and those enrolled “off-exchange” who sign up directly through a health insurance carrier.

The average rate change for the past three years is only 1.1 percent. This three-year period marked the launch of California’s state subsidy program, the promotion of coverage to address the needs of those losing insurance due to the COVID-19 pandemic, and the recent rollout of the American Rescue Plan.

“Health care costs are never a one-year story,” Lee said. “The past three years show how California has led the way not only by providing stability and lower costs to our consumers, but also through the state’s modeling of expanded financial help, which is now reflected in the American Rescue Plan.”

While the expanded subsidies available through the American Rescue Plan can only be received by consumers who enroll through Covered California, consumers both on and off the exchange will benefit from the competitive marketplace and standard patient-centered benefit designs, which allow them to shop for the best value and save money if they switch plans. The average rate change for unsubsidized consumers who switch to the lowest-cost plan in the same metal tier is -7.9 percent, which means many people may be able to get a lower gross premium than they have now if they shop and switch.

The main factor that contributed to the low rate change is Covered California’s strong and healthy enrollment. Covered California saw a big jump in new enrollment in 2020 due to the state subsidy and the implementation of the state penalty for going without coverage. Since then, it has seen a surge in enrollment because of the new subsidies through the American Rescue Plan and actions to meet the needs of Californians who lost their employer-sponsored insurance.

The low rate change for 2022 reflects carriers’ anticipation that this trend will continue during the special-enrollment period that will last through Dec. 31, 2021, and in open enrollment for 2022, which will begin in November.

Covered California now has the highest enrollment in its history, and the state continues to be home to one of the healthiest consumer pools in the nation. Data from the Centers for Medicare and Medicaid Services shows that California had the second lowest “state average plan liability risk score” in the nation in 2020, which marked the seventh straight year that it has been among the top five states in fostering healthy enrollment in the individual market. Over the period from 2020 to 2022, Covered California carriers have indicated that the improved risk mix from new enrollment has contributed to lowering premiums by 3 to 5 percent. Other factors have caused premium trends to be below the usual medical cost trend of 5 to 7 percent, such as the impact of the COVID-19 pandemic and deferred care.

The preliminary average rate change reflects changes in premiums before federal subsidies, which cover about 89 percent of the premium for those getting financial help. In addition, premiums will vary by region and by an individual’s personal situation (see Table 2: Covered California Individual Market Rate Changes by Rating Region). The rates have been filed with California’s regulators, the Department of Managed Health Care and the Department of Insurance, and are subject to their final reviews.

The American Rescue Plan is already lowering premiums for an estimated 1.5 million Californians, and hundreds of thousands more could get help becoming insured or reducing the cost of the coverage they have now. The new law ensures that everyone eligible will pay no more than 8.5 percent of their household income on their health plan premiums if they enroll through an Affordable Care Act marketplace.

The latest data shows that nearly 700,000 people enrolled in Covered California now have quality coverage through brand-name health plans for only $1 per month. In addition, the American Rescue Plan dramatically reduced the net premiums paid by households across all income ranges in the state (see Table 1: The American Rescue Plan Lowered Net Premiums Across Covered California Households in 2021).

“The American Rescue Plan lowered the average premium cost by 50 percent for many Californian households that were already eligible for financial help, and newly eligible middle-income families are saving an average of more than $400 per month,” Lee said. “As federal lawmakers deliberate the future of the American Rescue Plan, we have seen clear evidence that it is lowering premiums and increasing enrollment in California and across the country.”

The combination of record enrollment and a healthy consumer pool helped prompt carriers to expand the areas they cover throughout the state, with Covered California allowing a new carrier to join the exchange in one region:

“Across the state, Californians will have a choice in coverage, and most will have four or five choices,” Lee said. “That means the Affordable Care Act is putting consumers in the driver’s seat, and they can choose the option that works best for them.”

Raising the Bar on Quality, Addressing Disparities and Improving Care

In addition to providing increased value and choice for Californians, Covered California is also continuing its work to improve the quality of care that is delivered to consumers  and to address the health care disparities that negatively affect many communities of color across the state.

Staying Safe While Getting Help Enrolling

While the rates and increased choice will not go into effect until Jan. 1, 2022, consumers do not need to wait for the traditional open-enrollment period in November to sign up for coverage. Covered California opened a special-enrollment period to allow the uninsured, and those enrolled directly through a health insurance carrier, to sign up and begin benefiting from the new financial help offered through the American Rescue Plan. People who sign up by July 31 will have coverage that starts Aug. 1.

“The sooner you sign up, the sooner you can start saving and be covered. We do not want anyone to be uninsured or leave money on the table,” Lee said. “The American Rescue Plan is making coverage more affordable than ever, and more and more Californians are getting high-quality coverage for just a dollar.”

Consumers can easily find out if they are eligible for Covered California or Medi-Cal — and see whether they qualify for financial help and which plans are available in their area — by using the CoveredCA.Com Shop and Compare Tool and entering their ZIP code, household income and the ages of those who need coverage. 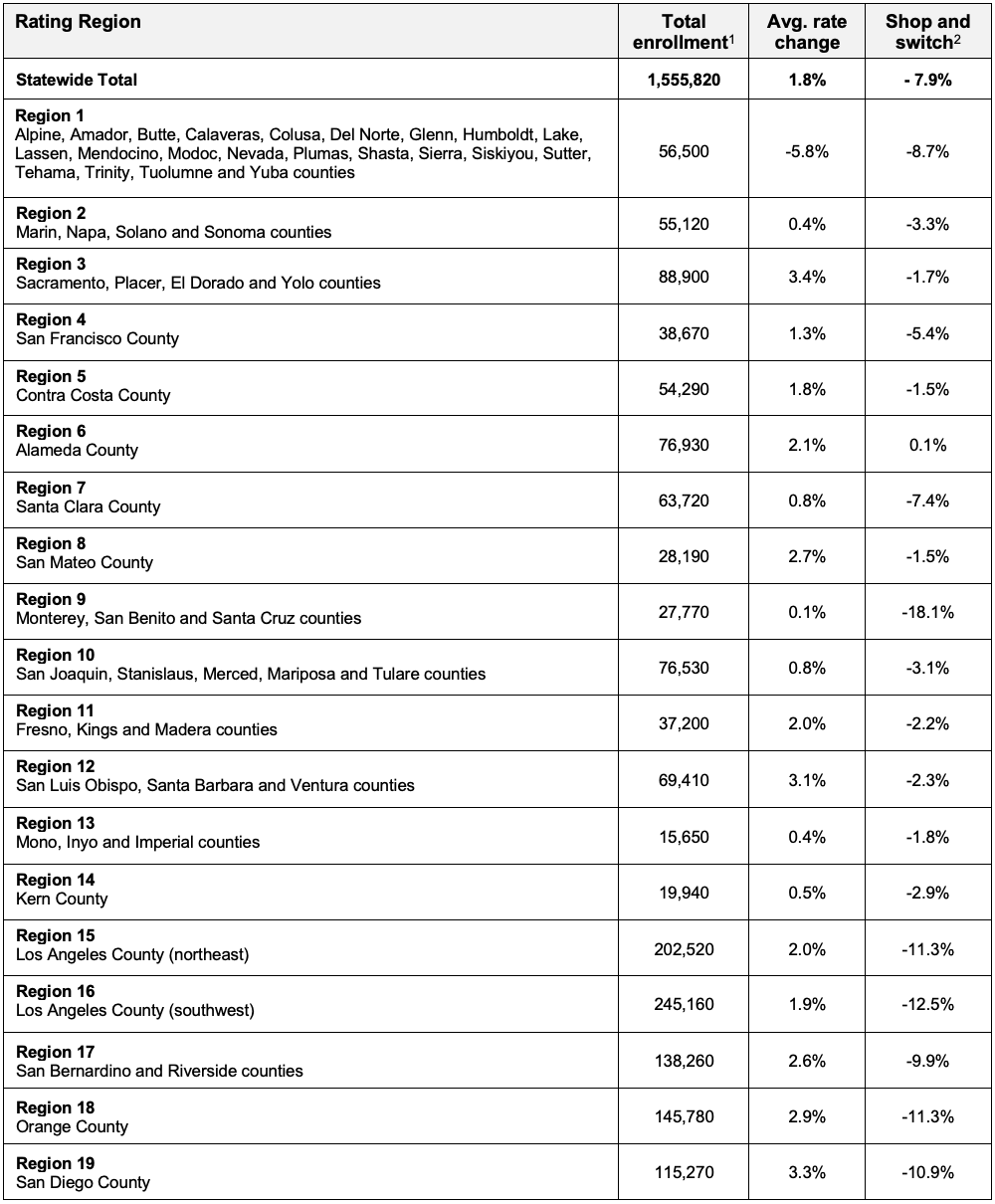 1 Effectuated enrollment for coverage in the month of March 2021. See https://hbex.coveredca.com/data-research/library/active-member-profiles/CC_Membership_Profile_2021_03_R20210623.xlsx for full data profile.

2 Shop and switch refers to the average rate change a consumer could see if they shop around and switch to the lowest-cost plan in their current metal tier.

3 The weighted average rate change refers to the overall average throughout the state. Actual rate changes for consumers may vary based on their personal circumstances, the area they live in and their plan’s metal tier. 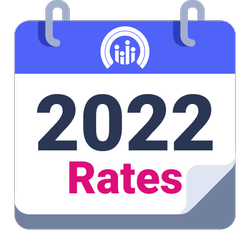